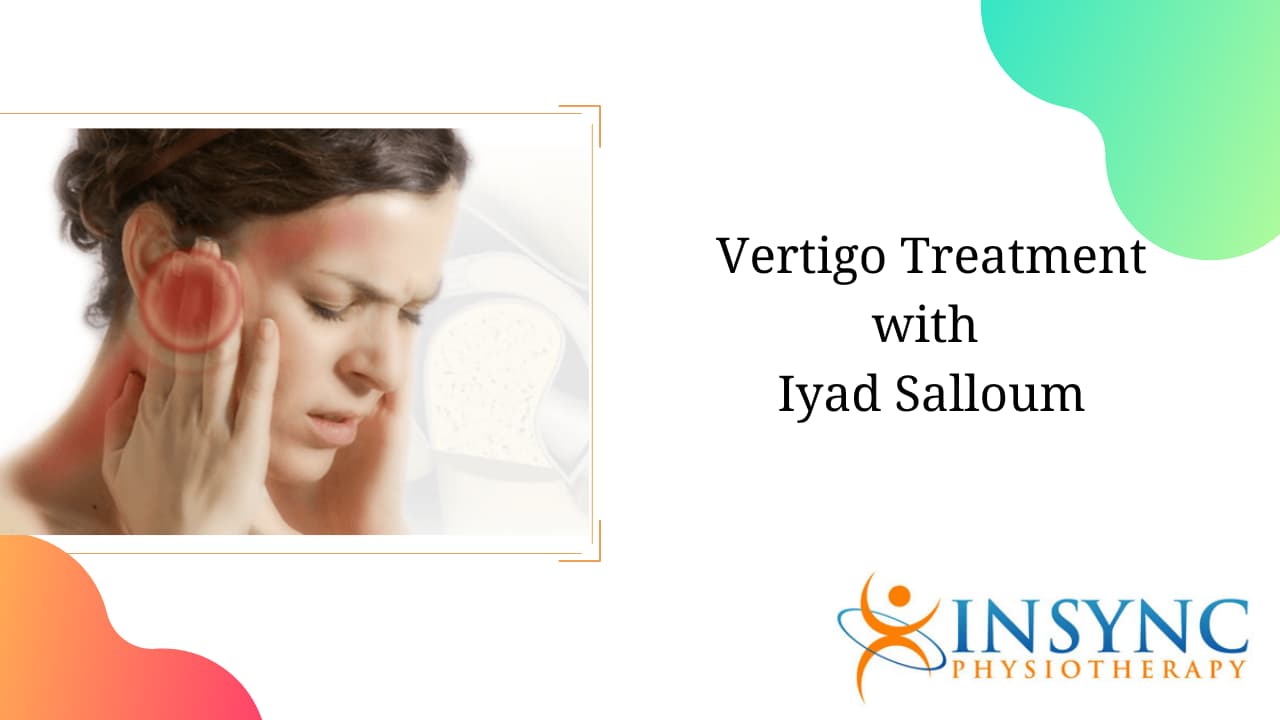 Mark: Hi, it's Mark from TLR. I'm here with Iyad Salloum, he's the clinical director here in North Burnaby of Insync Physiotherapy. They're a multiple award-winning physiotherapy clinic and we're going to talk about something that's fairly common in the world these days, vertigo. What kind of treatment do you do for vertigo?

Iyad: Hey, thanks, Mark. Yeah, so vertigo is getting more and more common. And what we're seeing is as the population ages, it's spontaneously can happen with lots of people. Now there's a big difference, I think, between just general dizziness and vertigo. And that's probably important to clarify cause you know, dizziness, just the feeling of unease or feeling like you're going to tip over. You're just not quite steady on your feet, but vertigo is the sensation that the room is actually spinning around you. And that can be a little distressing for a lot of people. And there are lots of causes. One of the ones we're going to be talking about today is BPPV or benign paroxysmal positional vertigo.

Now it sounds like a mouthful, but that tends to actually account for about 20% of all the cases. And it's really simply put, you get a dysfunction in the organ in your inner ear that helps our brain figure out what our head is doing in space. So it's one of the ways that we figure out what's going on in the world around us.

Think of a coordinate that your GPS kind of watch will take in to just tell you where you are on this planet. So what happens at the BPPV is we have some loose crystals that are sitting on one of the organs, the organs in our ear kind of detect movement side to side or rotational. And one of those crystals can get dislodged in one of the canals in this vestibular organ.

So what happens is the crystals move separate from the rest of the head and they can move on their own because of the momentum of the fluid they rest in. And then people just perceive a movement. So they think one side of your brain listens to the ear saying, oh, look, this one's moving. When the other side and your eyes telling you you're not moving. So that conflict causes the spinning sensation to happen.

Mark: So the symptoms would be that the room's spinning. Do I need to see a doctor for first?

Iyad: You can see a doctor first or you can check in with most physiotherapists have enough training to basically identify a cause of this. So let's say in your basic graduate training in physio school you'll know the basic things about what kind of dizziness would look like an inner ear dysfunction versus something else.

So, for example, somebody who just had a head injury, you know, can sometimes have a bit of dizziness and vertigo, so they'll have two different types of things. And like most of us are good at identifying what's causing what and or if it's not the inner ear, maybe they'll follow you up with a recommendation to see your doctor.

If it's something let's say a heart problem, that's causing you to feel a bit lightheaded or dizzy, because most of us just think of dizziness is just one symptom when it's actually there's multiple types of dizziness. So yeah, seeing any primary care specialists like a family physician or a physio should be actually quite recommended. But if you having symptoms of spinning, you can just go straight to the physio right away.

Mark: So not all, like you mentioned basic physio training, but not all physios are actually trained in how to deal with vertigo on the level that you have for instance. So what do I look for in a physio who's trained in this?

Iyad: So most of us will have some kind of training. And if you look online on anyone's write-up or description, you'll see something named vestibular rehab or vestibular physio, and the vestibular part stands for the inner. So that's something I would look for if you are having some kind of vertigo episode or spinning episode.

Now, like I said, the thing that we're going to specifically talk about today is BPPV, which has very short episodes of spinning whenever your head moves in a certain direction.  And it could be to the left, could be to the right, or it could be kind of up into the left or up to the right. So all of that can trigger these brief episodes. And it can be a bit distressing for the person, but it's actually also very treatable.

Mark: So what causes this?

Iyad: Anything from an impact to the head, to just a spontaneous thing that happens. We actually don't know. There's a lot of different theories about why it happens. But I wouldn't be surprised if like if you randomly, suddenly a person starts to develop it out of the blue.

And they feel sometimes that sensation in bed, is where usually they're first aware of it, where they roll over on their side and they feel a bit of the spins, you know, like after a night of bad drinking, can happen.

Mark:  And sticking your leg out of bed and on the floor, doesn't help.

Mark: So what's a typical course of treatment?

Iyad: So first thing we want to do is actually just identify, is this actually the inner ear? Or is it something else? Like I said, a lot of us just think of dizziness as one big thing. If it is confirmed as a episode of BPPV, which is the loose crystal, there are some treatments that help reposition the crystals back to where you know, they came from.

So there's these kind of fluid filled sacks that the crystals usually are housed in. You would see a physio or even sometimes some doctors will do this. The treatment is to do one of a couple of techniques, depending on where that crystal is, to reposition it back in its place. And it tends to be, you know fairly traumatic in its effect.

Like you'll have a pretty good result almost always. And you can get a kind of a nice response. And then some people might have a bit of residual stuff, maybe from an older injury or some other impairment. And that's where the treatment then dovetails into more of a home exercise program to help address those things, to help you almost relearn how to use those and integrate those sensations back to normal.

Mark: So how long until the room stops spinning around?

Iyad: Yeah, that's a very good question.  If it is BPPV, it's quite responsive, really quick. Most people will be anywhere from one to three treatments and they'll be pretty good. Like I said, if you have other causes of vertigo, like let's say a viral infection of the inner ear, those tend to be a little long lasting cause you're trying to deal with something a little different.

However, in cases of BPPV the episodes, when they do happen, tend to be very brief, but after treatment we see actually a significant reduction in that. And it's quite safe. And most people who actually have presented to the clinic have Googled it and tried their own home remedies. And I mean, the benefit of that is that it can never really kill you. It's in it's name, it's benign. It's a benign positional vertigo. So it's based on a certain angle that your head goes in and it's triggered. So trying a self-treatment at home isn't dangerous, but quite often people will try it a couple of times and if it just does nothing they'll come in and get it done with one of us.

Mark: If you want your vertigo treated the right way, so you actually get feeling better fast, the guys to call in Burnaby are Insync Physio. You can reach them at 6 0 4, 2 9 8 4 8 7 8 to book some time to see Iyad and he'll get you straightened out. Or you can book online insyncphysio.com. Thanks so much Iyad.

Iyad: Thanks Mark, appreciate it.