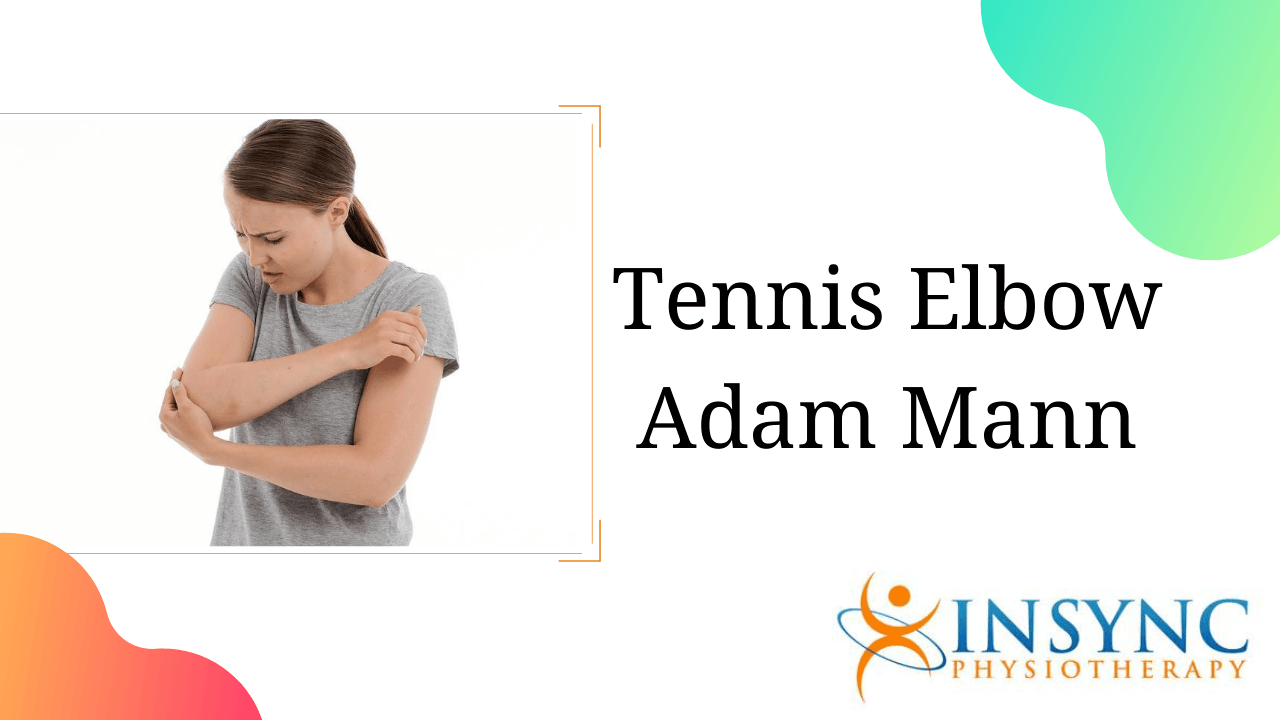 Mark: Hi, it's Mark from Top Local. I'm here today with Insync Physio, Adam Mann. Insync has won many times Best Physiotherapist in Vancouver. And we're going to talk about tennis elbow. How are you doing today Adam?

Mark: So we're going to go through a client's injury history. What was going on with this client's problems.

Adam: Yeah. So this client was basically a middle aged woman who had an office job and about a month ago started attending a group exercise class where they were just going through different weights and different circuits. And basically about a week before I assessed her, she was doing a motion called a cling and press where she kind of, are lifting up a bar weight, flipping your wrist, and then just extending your arms up. And it wasn't a whole bunch of weight, but she just felt a really sharp snapping pain in her forearm. And basically the first couple of days, it was pretty sore. And so she, iced it, she kind of rested it for a little bit, but yeah, it just wasn't getting better. And at nighttime, it kind of created this dull ache, which was from burning and nagging. And basically when she was holding out her arm in certain directions, and she was carrying anything, even a cup of coffee, she felt like a weakness and she wasn't able to actually lift that cup of coffee.

And so at that point, when she couldn't have her coffee, that's when we assessed her.

Mark: How do you go about doing an assessment on a client when they come in with issues like this?

Adam: So first off we do a history where we just really figure out what's going on, what the mechanism of injury was. So we kind of find out the movement that caused the injury.

And then we basically take a look at some objective measurements. So we'll look at somebody's grip strength. We'll make sure we'll look at their range of motion. After we finished talking to them, we had a general idea of, and what the tennis elbow was. That it was tennis. So, but we also take a look at the neck and we look at it, the shoulder and we sort of make sure that we're not missing anything else.

So I did ask in particular about neck pain, because there's a bit of research that shows that compression at the level of the neck can make some of these forearm muscles more sensitive to injury. So we do what's called an upper body scan where we just kind of look at the range of motion and strength of the neck, of the shoulder, of the forearm.

We look at the joints in the forearm to make sure that there's no other fractures or anything like that. And then we come up with the diagnosis.

Adam: So, yeah. Good question. Nerves, exit the spine and travel through a bundle of bundles called the brachial plexus, and basically any nerves higher up at the level of the spine, at the of the neck, the shoulder or the forearm that may be compressed, can cause basically a bit of sensitivity, lower down, sort of like a hose that has a bit of compression. At the level of the neck would make sure that the flow of the nerve which does muscle strength, does reflexes, does sensitivity can actually just not function properly and that can lead to more people to have more prone injuries in that area.

Mark: So what was the course of treatment?

Mark: And so what was the course of treatment? And how did it all work out for the client?

Adam: Absolutely. So of course with anything, we start with a graded, it's a tendonitis injury. So with anything, what we do is a graded exercise program. So we start with adding a load, but making sure that that tendon doesn't get too angry. We add sort of an isometric compression on the tendon where we're just going to hold the tendon in a certain position with a bit of a load. And then we sort of increase that load with move motions that are, where we take the tendon to a little bit more of a compressed position, and then we add movement and we add rotational motions.

And basically we start to address some of the motions and range of motion restrictions in the neck at the same time. But yeah, at that point we got her grip strength back up to snuff, and we got her back into the gym, made sure that the pain was under control. And after about a month and a half, she was completely discharged and back to doing everything she liked doing.

Mark: So there you go. If you have some tennis elbow issues and you want people who dig deep into exactly what the cause is, not just where the pain's happening, but where it might be coming from upstream, so that you get relief fast. You want to go see Insync Physio, Adam Mann. You can book online at insyncphysio.com in Vancouver at 604-566-9716. You can call and book. Or you can book online. Thanks Adam.

Adam: Have a good one, Mark.

What is Tennis Elbow (Lateral Epicondylitis)? 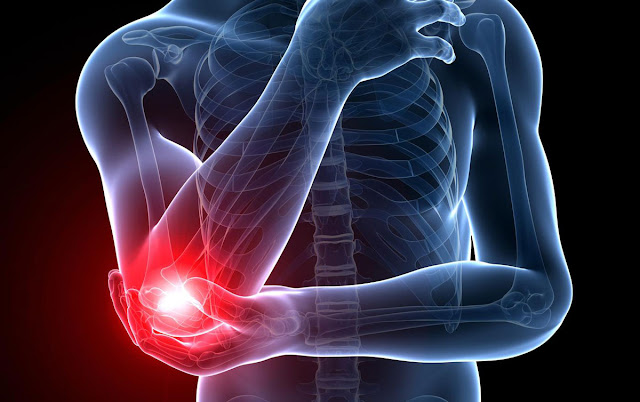 Tennis elbow is a widely common soft tissue condition characterized by pain and inflammation on the lateral and outer aspect of the elbow. It is typically due to overuse of the extensor carpi radialis brevis tendon through repetitive actions such as improperly playing tennis, operating machinery, typing or other gripping activities. Symptoms may include weakness in the arm, stiffness in the elbow, and difficulty performing common hand actions such as holding an object. While ice packs and braces can assist with pain control in the early stages of tennis elbow, improving one’s fitness is very important in the long-term management and prevention of this elbow condition. Try these five exercises to strengthen the arm: 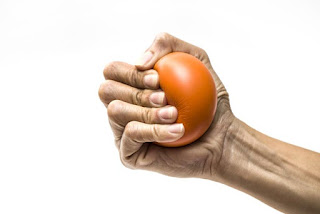 1) Hold a tennis ball (rolled up sock or towel can also be used) in your hand.
2) Squeeze the ball for 5 seconds and then relax the hand for 10 seconds.
3) Repeat 8 – 12 times for 3 sets, then alternate to the other hand and repeat exercise. 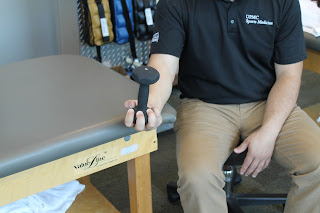 1) Place your elbow on a table so that your hand and wrist are just off the edge.
2) Hold a very light dumbbell (around 2 lbs) in your hand.
3) Rotate the arm outward and turn the dumbbell up. Then rotate the arm inward so that the dumbbell will point back down.
4) Repeat 15-20 times for 3 sets on each arm. 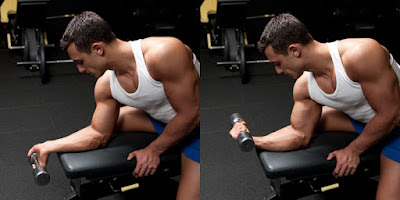 1) Place your elbow on a table so that your hand and wrist are just off the edge.
2) Hold a very light dumbbell (around 2 lbs) in your hand so that the palm is facing up.
3) Flex your wrist by curling the dumbbell towards the body and then back down to starting position.
4) Repeat 8 – 12 times for 3 sets. Alternate to other hand and repeat exercise. 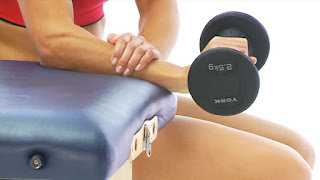 1) Place your elbow on a table so that your hand and wrist are just off the edge.
2) Hold a very light dumbbell (around 2 lbs) in your hand so that the palm is facing down.
3) Let your wrist slowly drop down and then lift your wrist back up to starting position.
4) Repeat 8 – 12 times for 3 sets. Alternate to other hand and repeat exercise. 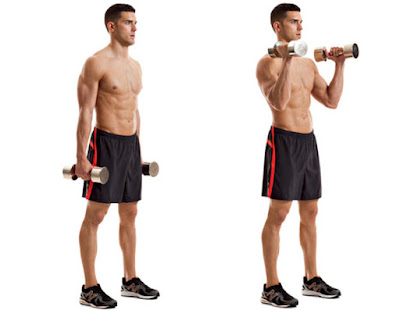 1) Stand with your feet shoulder width apart.
2) Hold a light dumbbell (5 to 10 lbs) in a hammer grip position (dumbbell is vertical) in both hands.
3) Keeping the elbows close to the body, flex your forearm upward to 90 degrees, then back down to starting position.
4) Repeat 8 – 12 times for 3 sets. Alternate to other arm and repeat exercise.