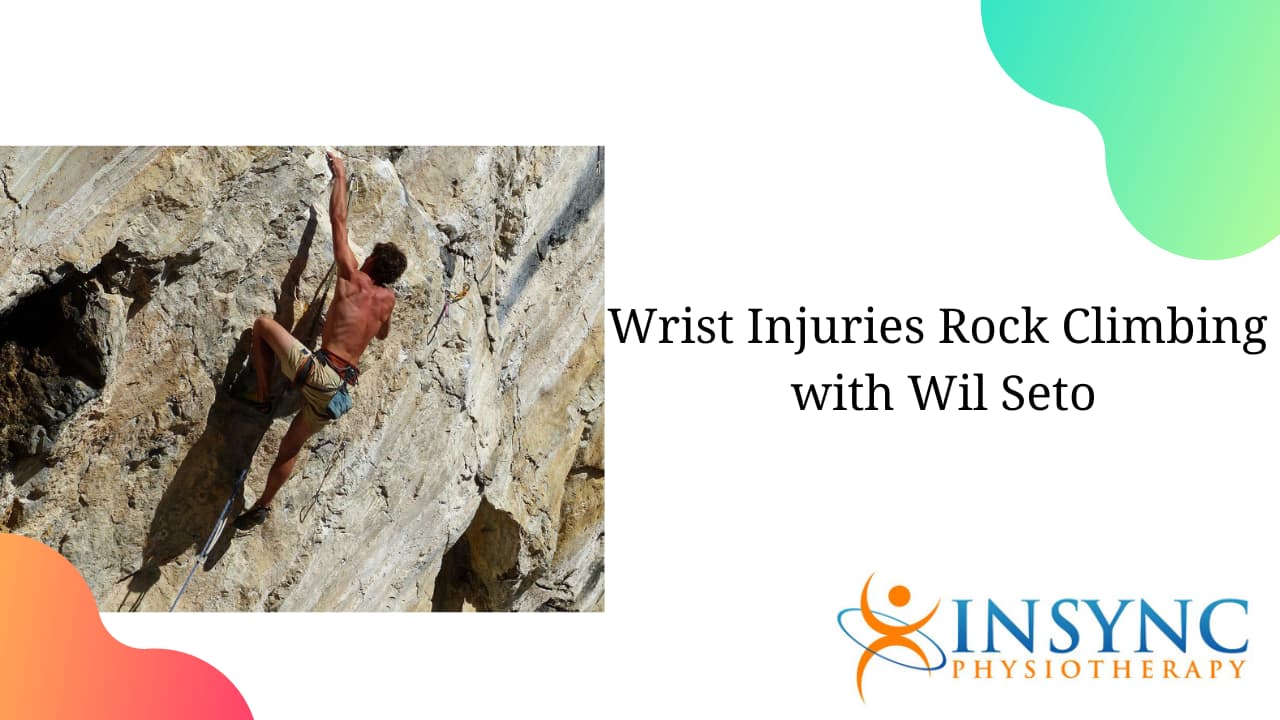 Mark: Hi, it's Mark from Remarkable Speaking. I'm here with Wil Seto of Insync Physio in Vancouver. And we're going to talk about wrist injuries from rock climbing. How you doing Wil?

Wil: Hey, Mark. I'm doing well. Thanks. How about you?

Mark: Good. So what kind of symptoms would someone have other than just pain? Like how do you hurt your wrist? I can see fingers, all kinds of things, but your wrist, rock climbing.

Wil: Yeah. So, so the symptoms would be other than pain, would be like some swelling, obviously like you're saying, and then some loss in range, but also with this kind of injury, you can get some clicking in the wrist. So what I'm thinking more specifically is when you have the type of injury where you say, if you're rock climbing and bouldering, and you basically fall down and then you land with your hand outstretched and wrist extended kind of thing, to try and soften the blow of the fall. Then that can cause a strain into your cartilage and this side of your wrist, which is called the ulnar side.

And so that cartilage, that whole area is called the triangular fibrocartilage complex, TFCC for short. And so basically the reason why it's called that is because there's the cartilage and then you also have ligaments in your capsule in through there. And so it's a complex in the fact that they all work together to stabilize that area of the wrist.

And so in rope climbing or league climbing, or more specifically like what's called traditional climbing, you're doing a lot of crack climbing and hand jamming. You basically have over rotated wrists. So you can either basically over-pronate is what it's called, where you turn it that way and you jam it in a rock. And then you're like basically trying to hang all your weight off the wrist. So you can now imagine all the forces that are basically being put on the wrist in that motion. And then also the twisting where we may try and just do anything to hang on. So you can see how the wrist can also be injured in that area.

So those are very common ways of doing. And the other way is also when you're climbing, whether it's on a rope or bouldering or whatnot, and you're trying to like push up to a really hard move. And you're now once again, you're kind of pushing off and extending your wrist and putting pressure through that palm and that's called a mantling move. So you're just essentially trying to like push off this way and now you're super extended.

Mark: Sort of like if you're climbing up onto a ledge and you're trying to mantle yourself up over that with all that pressure being right on your wrist. So one of those things, we don't really necessarily understand that the wrist is incredibly complex with all the bones, ligaments, tendons.

There's eight bones in there, plus all your metacarpals that make up your wrist. So we think of our shoulder as being complex, but you know, our wrists are actually possibly more complex. So putting all that pressure on there without training for it can be a really interesting situation. So how do you go about diagnosing what's actually going on and then what the course of treatment's going to be? What are the steps.

Wil: Yeah. So with these type of injuries, these type of cartilage injuries in your wrist, there are a few specific tests. That will either rule it in or rule it out. And you don't want to just do one of them because you want to do a few of them to just sort of, you know, get sort of a battery of them. And then that'll give you a good idea. And also, you got to hear out what's the, okay yeah, I did this or I did that or I landed like this. And then you add that with a test and then you can sort of figure that out.

And so the other important component that's missing here is that especially with so once again, I talked about this in previous podcasts or different videos where competition climbers tend to have less of those injuries versus climbers here are just more, you know, beginners or just avid, but don't really take care of their bodies or really look at trying to balance things out and be strong overall. And so why I bring that up as an important point is because if you climb a lot and you don't look at recovery, and you're really imbalanced and you're just always training, climb, training, climb, training, climb training. You're not doing other things. Then you can get really tight in your flexors and so those flexors, especially certain flexors that attach from your elbow, forearm all the way down to that wrist area. By that cartilage, that complex area, it can cause a lot more sort of compression strain already.

So even pre-loading before you even start climbing, you're already at a disadvantage. Now, because of that, then you go to like, you know, all of a sudden you have to like catch yourself, because you're going to fall or you have to do one of these maneuvers where you mantle or you have to like hyper pronate and hang and really tension that joint. Then you're already at a disadvantage because everything's more compressed. And now you're going to torque that cartilage complex area even more.

And I see this quite a lot. And the other thing I found too, you know, you look at stuff that's going on in the neck and all the way down. Usually related. Usually there's stuff related to that. So that's why I say that with competition climbers, there tends to be less wrist type of stuff like that, you know? Beginner climbers, you go hard at it, and they fall a lot or they do those maneuvers and without a lot of muscle balance and recovery and looking at okay, you know, I got to train this part of my body a little bit more and having more balance in that way.

Wil: Yeah. So you also want to consider, okay, what's the healing timeframe for something like this. Because that's important to look at, how well is this doing? So typically, these things can be minor and you can function and you can still keep climbing and it's not like, oh man, I can't climb ever again. Yeah you can. So four to six weeks, you should start to see some good improvement and it takes about that length of time for it to heal.

And so during those four to six weeks, what are we working on? Working on making sure that you increase your mobility. So you want to make sure that you get the mobility back in your wrist in all directions and also strength. So strength, you want to work on many different aspects of strength.

So there's three types of strength. So there's what's called isometric, concentric and eccentric. So isometric is when you develop strength, tensile strength in your muscle where that force of that muscle, it is tensioning up, but there is no lengthening of the muscle. There's no movement in the joint. A concentric force is basically when you're tensioning that muscle and then you're shortening the muscle and shortening the joint or flexing the joint or extending the joint. So the key is the shortening of the muscle versus isometric, there is no change in the length of muscle. Eccentric strength is the constant tension strength of the muscle while it's lengthening, whether it's inflection or extension in whatever movement. So you want to focus on all those different aspects of strength. And the last thing then is really focusing on your functional movement.

So for climbing, it's very functional for like these different types of holds that you start to need to be able to grasp again, you know, from crimper hold to pincher holds and to even like lock offs, and there's another term called gaston, where basically it's putting your wrist in a specific position.

So there's all these different type of positions in different holds in different ways that you want to start to build that functional strength. And here's the other key thing too. You want to do that building your core, building your, not just like your AB core strength, but also your lower extremity strength. Because research showed that when you start to work on your lower core, then you start to get more core strengthening in your upper extremities.

And you have more core strength in your scapular muscles, which is your shoulder blades. Then you're going to be relying less on your forearms all the time. And this is important in the rehab process. We don't really think about that in climbing, you know in volleyball it's a given because you got to run and jump and then hit. You get a wrist injury or shoulder injury yeah, you got to work on core. Seems more obvious. But in climbing, we don't really think about that as much. So we got to also focus on that.

Mark: If you've had a wrist problem from climbing, the guys to see are Insync Physio. You can book online at insyncphysio.com. They have two locations to serve you. One in Vancouver on Cambie Street and King Edward, you can call them (604) 566-9716. Or in North Burnaby on Willingdon and Hastings (604) 298-4878. Get expert help from expert climbers so that you can get back doing the sport you love. Thanks Wil 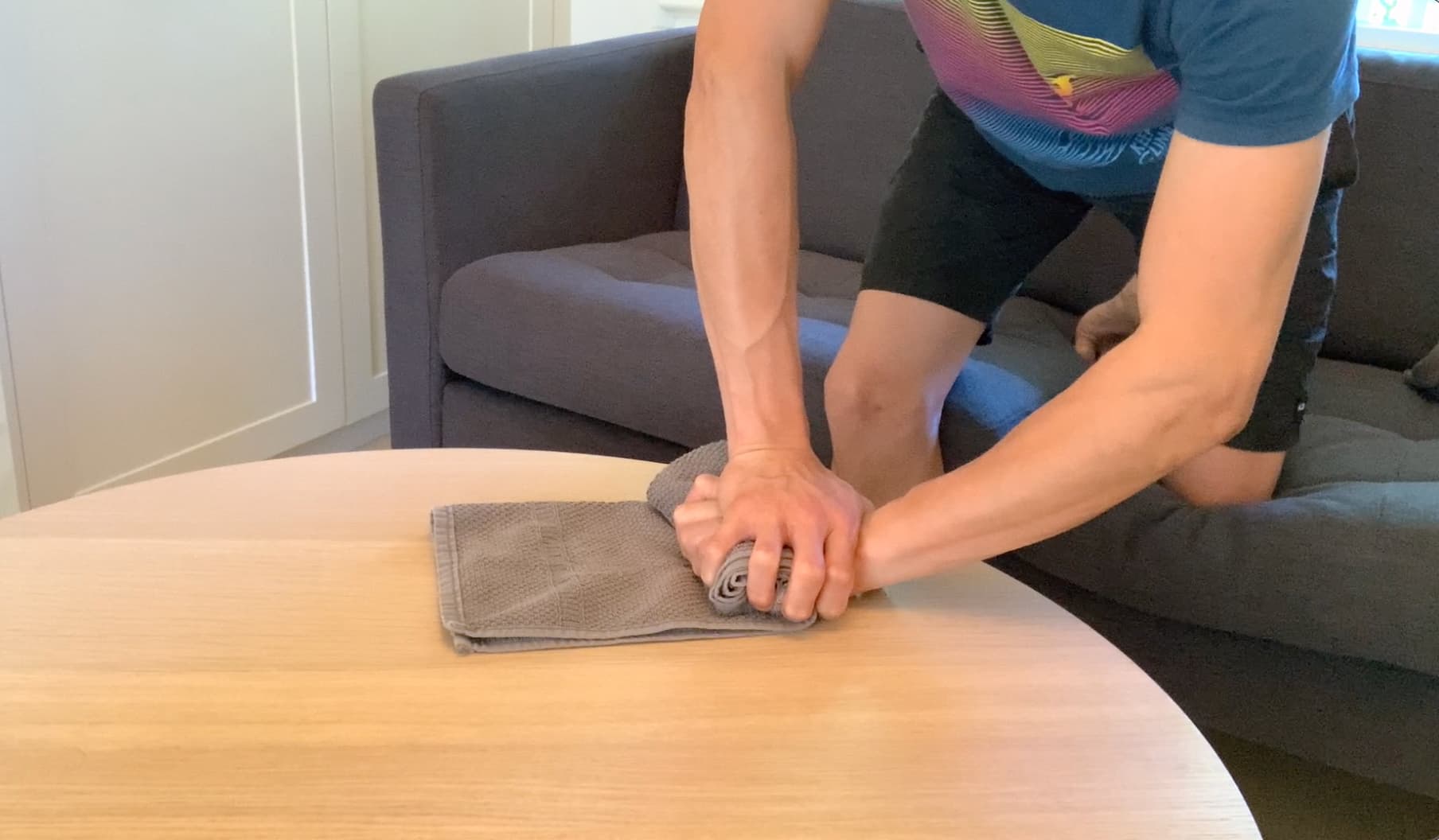 A common problem after spraining your wrist is a restricted pinching pain on the top of the wrist. Pain and loss in full extension can persist when trying to put weight through the hand with the wrist extended, like pushing yourself up from sitting or doing a push up. This can continue to occur even months after it’s fully healed because the movement dysfunction in the wrist has not been normalized. Here’s an exercise that can help restore this.

Start by identifying your scaphoid bone located between your two thumb tendons and the second bone called your lunate which is right beside it. You will also be using the webspace of your opposite hand. Roll up a hand towel and can grab it comfortably with your knuckles down.

Then wrap the webspace of your other hand nice and snug around the those two bones of your wrist with some downward pressure while pressing down with your affected wrist at the same time. Extend your elbow to provide weighted extension into your wrist, then release.

To add more functional weight resistance, bring one leg on the couch and go onto one foot on the ground to get a little higher. You can also stand up to add more weight resistance. Repeat this for 15 reps doing 3 sets 3 times per day.

This exercise should not cause any pain or discomfort. If you have pain or are unsure about what you are doing consult a local physiotherapist before continuing.