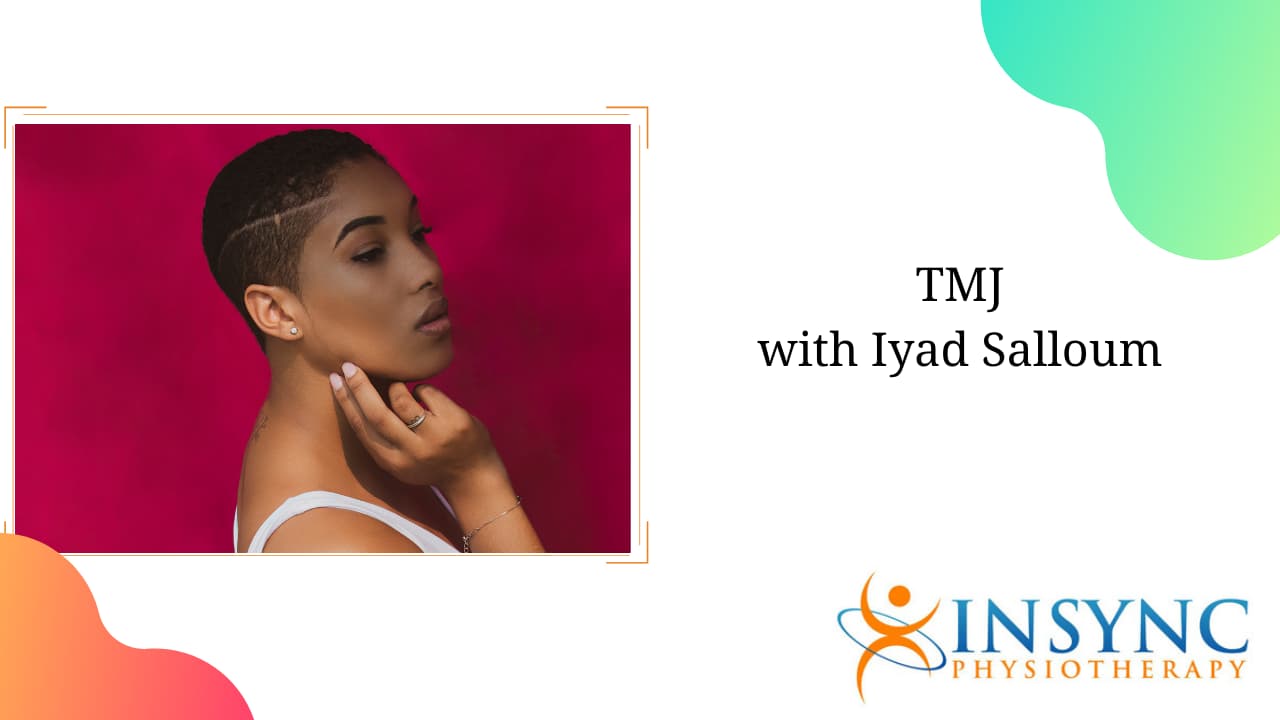 Mark: Hi, it's Mark from TLR. I'm here with Iyad Salloum of Insync Physio in North Burnaby. He's the clinical director. And we're going to talk about a very common kind of issue. TMJ, what is TMJ?

Iyad: Yeah. So the TMJ is your temporomandibular joint. So it's kind of right here, it articulates kind of at the base of our skull. And you know, you need it to eat. So it's to chew your food and all that stuff. So temporomandibular disorders or TMD is what most people will kind of be familiar with are, when you have a dysfunction in that joint system and the way the muscles kind of work around it. So we actually see that quite a bit in clinic. And it's often funny how many people are surprised that it's something that could be treated by somebody who works in any musculoskeletal practice, like ours.

Mark: So what kind of symptoms would it be? Would this be where your jaw is clicking or is it where you got actual pain in the joint? Pain when you're biting into something? And what would make the difference between me going to the dentist and coming to a physio?

Iyad: Oh, fair enough. Yeah. So like easiest distinction would be anything to do with your oral health would be good to see a dentist first. So things, for example, like if there's issues that you might need some more interventions or like even something as basic as a cleaning, anything related to that like kind of how your gums are receding or not, all these kind of classic oral hygiene issues or just oral health issues would be best left for the dentist.

We primarily deal with issues of the joint and the muscle. So common symptom would be somebody who's struggling to open their jaw actually. And this could happen funny enough, after holding your jaw open for a long period of time. Like I've had people after a certain procedures where they have no other option, but to hold their neck and their mouth in a position for too long.

And then it becomes really challenging for them to either bite or to open. And this is where I guess we come into play. Where we can do an assessment. Sometimes the assessments easy to do on the outside, where we're able to feel how things move and just visually assess it. And then other times we can do an internal assessment where, don't worry me glove up and it's sanitary, and we go right in and we see and feel how those joints and muscles are behaving. So there's lots of options that can happen that way. And a common one that's often forgotten is, jaw pain can happen as a result of issues in the upper neck. So after a long period of time, impairments here can actually lead to dysfunctions there.

So this is how we quite often, like we'll spot these in clinic where somebody is coming in for treatment of headaches or neck pain, and you know, through talking a bit more, you realize that they're struggling to have apples and stuff like that. So then you start to link the two together and often it's funny, some people you treat the neck and the jaw kind of will resolve itself. And then in some cases we might need to target the jaw a little more specifically.

And another group will be the ones who clench their teeth at night. So, that's quite common and it happens for a multitude of reasons. Sometimes it's hard for us to control what we do at night. So then people wake up with extreme job pain sometimes in the morning and they feel like it's really takes them a while to warm up those musculature, especially around here in deep in the inside. So those are common cases that we will see.

And yeah, the symptoms tend to be either like clicking or pain with opening or pain with closing and biting. And in some cases we see deviations where the jaw will go to one side or the other. And that will be an issue on one side. So you have one side that's dropping or depressing properly. And the other side that's not. So we see that moving side to side. So this is where people say, oh, I have a crooked bite.

Mark: So what's causing all this. Is it just like you mentioned that that could be neck problems, but what's actually causing the issues in the joint itself?

Iyad: Well, I mean, a common example would be somebody who let's say, imagine if you're in your job, you sit too long. And if you sit for long enough in the same position without too much variety you could develop some tension or issues in your low back or your neck or your shoulders.

So prolonged positioning is a big one. Prolonged habits. Sometimes it's a manifestation of other things. So where people, let's say unconsciously will clench their teeth. Sometimes it's the result of trauma, like, you know, classic knock the face. We see that a lot from sports, for example, where somebody will get tackled or something like that.

And then there's the positions that, like, let's say you're doing a procedure, having something worked on and you have to hold your neck and head and your jaw open for a certain period of time. And then, I mean, yes, it's necessary to deal with another issue, but then it can also cause some jaw pain.

It's a joint there's muscles there and the behaves very similarly to other joints where other muscles interact with it. So if you hold your head up all day for hours at a time, you might get a bit sore there. And it's the same thing in the jaw.

Mark: So when you're diagnosing this, what are you looking for?

Iyad: We look for this functions in, let's say opening and closing. Sometimes we'll just look at their bite. We will ask subjectively, quite often the patient's the expert on this, because they've been living with it for a while and then they decide to come in and get it checked out.

So yeah, those are the things we'll tend to look at. We will also look at the neck and in depth and we'll want to get a good history if there's any, for example, impact or trauma and things like that. Because we will just kind of give that a second consideration. But yeah, this is not necessarily the same as let's say somebody who has a dislocated jaw from a big impact. In that case, we would usually refer them to the right place to get that dealt with. But in here, it's just kind of think of it as like an achy, dysfunctional joint. That's either moving too much or not moving enough. And in some cases it's a control issue.

Like it's funny the way you would think about how, when you sprained an ankle, it becomes hard to stand on it for awhile. You can develop these same motor control issues in the jaw. So which case we have these corrective exercises that can actually help address these things.

Iyad: Yeah, it does tend to respond pretty well, which is the good news. We have a multitude of tools in our tool belt. So from basic education on things to kind of temporarily, maybe back off of to things to do more of. We'll definitely include some neck work in there. Exercise and also potentially hands-on manual therapy. We will sometimes do an internal assessment and treat whatever we see as a main kind of restricted area.

And it doesn't have to be anything crazy invasive. And in some cases people have had success in the past using dry needling to some of the muscles in the area. So those tend to work pretty well. But it's not again, we try to kind of go with the most minimally invasive, most comfortable approach first.

And then most people will get a couple of exercises to help kind of keep up their newfound, let's say function or their improvements that are kind of done in the clinic. And yeah, they tend to respond pretty well with a combination of those things.

Mark: If you have TMJ happening, some pain in your jaw. Get in and get it looked after at Insync Physio. You can book online at insyncphysio.com. If you're in North Burnaby, you can call them at (604) 298-4878 or in Vancouver on Cambie and King Edward (604) 566-9716. Insync Physio will look after your TMJ and get you chewing properly again, real quick. Thanks Iyad.