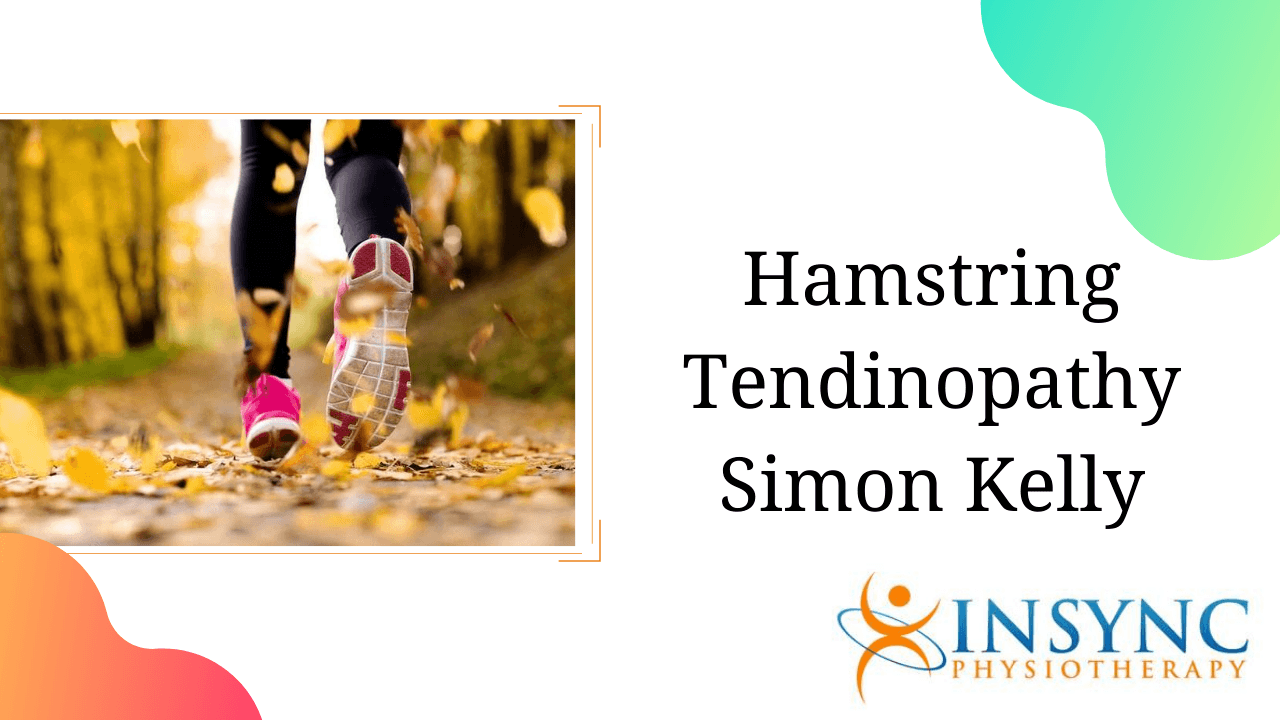 Simon: How you doing Mark, thanks a million for dialling in. I'm great to talk to you here today. I'm looking forward to chatting to you about hamstring tendinopathy, in particular actually. So,  yeah, we'll get cracking right away, I suppose.

I had a client who came in a number of weeks ago, she's an avid runner. She's actually run numerous marathons and she was increasing her running up to maybe sometimes even more than that, 35, 40 kilometres. And she was getting really, really bad and pain in her glute, in her bum muscles. So that's generally how she started presented in the clinic. There was no huge swelling or anything like that. At first it was kind of global. It wasn't like she wasn't able to specifically point to a region in her glute muscles.

So again, it was gradual in onset. So you're kind of pretty sure it wasn't like an acute rupture or hamstring tear or strain or anything like that. She couldn't remember a specific event. Again, that crosses off a lot of that diagnosis like I spoke about before. And it just gradually began to get worse and worse where she wasn't able to run it all.

But in particular initially, it was at 35 kilometres and then she couldn't even run 5 to 10 kilometres. So that's kind of when she came into the clinic, so I saw her then.

Mark: So that's the diagnosis part of it? What was the treatment plan that you put her on and how did it go?

Simon: So I had a treatment plan Mark because initially it was more global. I actually treated her piriformis muscle, which is a tight muscle in the back of her glute. We've all heard about well most of us have heard about that muscle. The sciatica gets compressed down through there so initially, because it was global and she wasn't pointing at a specific spot. I thought it was piriformis syndrome.

So we settled that muscle first, we desensitize her whole system, but then after two or three sessions, we realized that she was coming in and then she was much more specific. What I mean by specific issue is pointing at her sit bone. So we sit on two bones called ischial tuberosity, is the fancy term we use. That's where all your hamstring muscles attached to. And placing that with her subjective of lots and lots of running, basically lots of hip extension and knee bending. That's what your hamstring does, over many, many kilo meters that the tendon was just breaking down and it wasn't able to keep up with the load that she was pressing on it.

So new research has told us now that we actually should be loading it pretty heavy. She was in what we call a reactive stage of tendinopathy. So she'd be doing 70% of her own sort of body weight. An isometric max voluntary contraction we call it. What that does is it sort of breaks down the collagen crosslinks, it gets the tendon back to health.

And then we can do more of what we call isontonic. What do you see people doing in the gym. Lunges, squats lots of heavy weight through weight bearing. One key thing with hamstring tendinopathy is it's good to load it, but not in a compressed position. What I mean is compressed position is where you're leaning over, like bent over like a straight or stiff leg dead lift. That will be put in a lot of compression and tensile force on the issue of tuberosity. So you want to avoid that kind of stuff initially.

But eventually you want to be gone down into that position. So you'd be in a semi bent over position. Then lower and then lower until the tendon is able to withstand it.

I've seen seeing her at present. So she still has a touch of tendinopathy, but it's much, much better. And we are loading the tendon into compression now so she's almost doing her straight leg deadlifts back to normal. Which is great.

Mark: So there you go. If you've got some problems with hamstring, tendinopathy, it's sore in your hams from running or any kind of exercise where your hamstrings are going to be bothering you. The guy to see is Simon Kelly at Insync Physio, he's in the Cambie Street office. You can reach them at (604) 566-9716, to book an appointment. Or check out the website insyncphysio.com. You can book online on there. And of course,  Insync also has for the folks in Burnaby, they have a North Burnaby office at (604) 298-4878. Again, you can book online at insyncphysio.com. Thanks Simon.

Simon: Cheers Mark. Thanks very much.

Kneeling down with a big exercise ball in front. Have either a partner hold down your legs just above your ankles or secure them by hooking them under a bar.

Keeping your back straight and your inner core muscles engaged and slowly roll down your forearms on the pinky finger sides, straightening out your elbows and moving slight past them on the ball. Come back up with control to the start position. Repeat this for 10 repetitions, doing 3 sets per day.

This is another great alternative exercise to further strengthen your hamstring muscles after an injury and retrain your core stability muscles to help them work better together again. 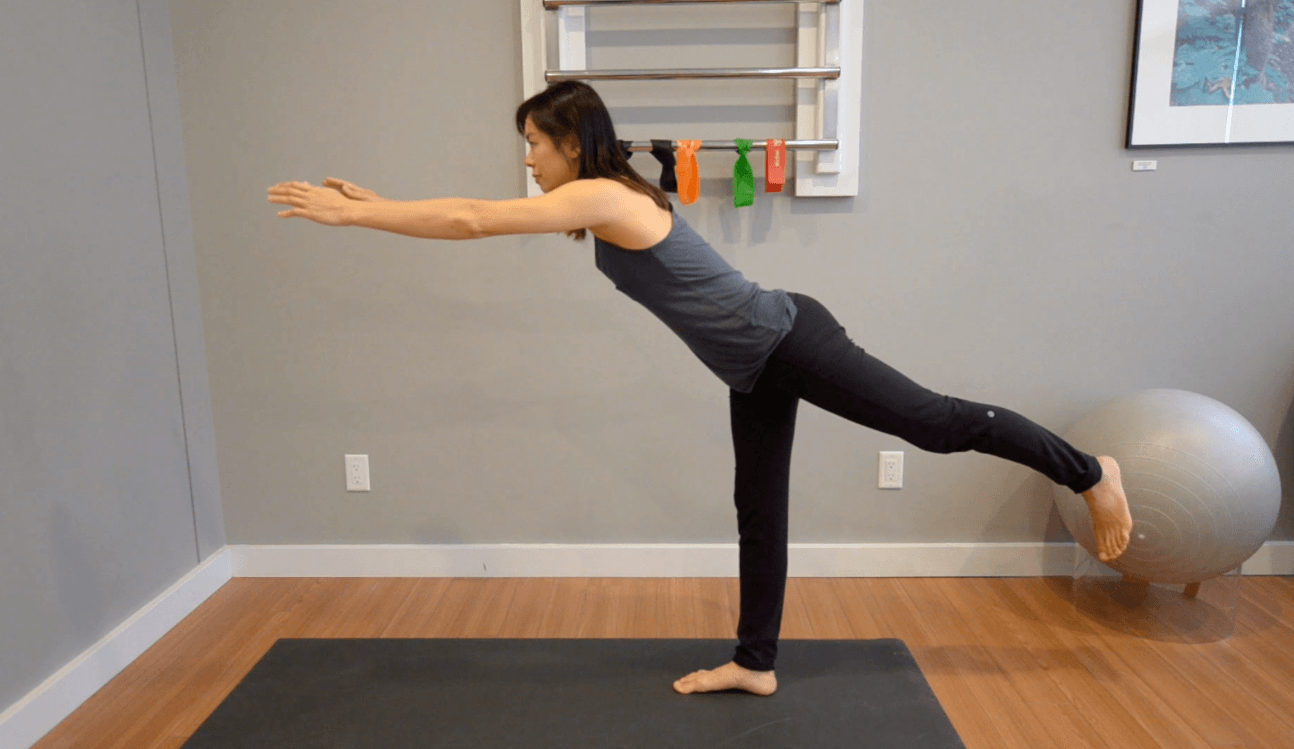 Begin by bending the knees a little. Keeping your spine in neutral and your inner core engaged, reach both arms forward and extend the left leg back leading with your heel.

Kick your left heel back and keep that pelvis level with the other side and straighten out the right knee with the corresponding foot on the ground. Then return to the start position.

Repeat this for 10 repetitions, doing 3 sets on both sides. This is a closed chain eccentric strengthening exercise for the right hamstring muscle. 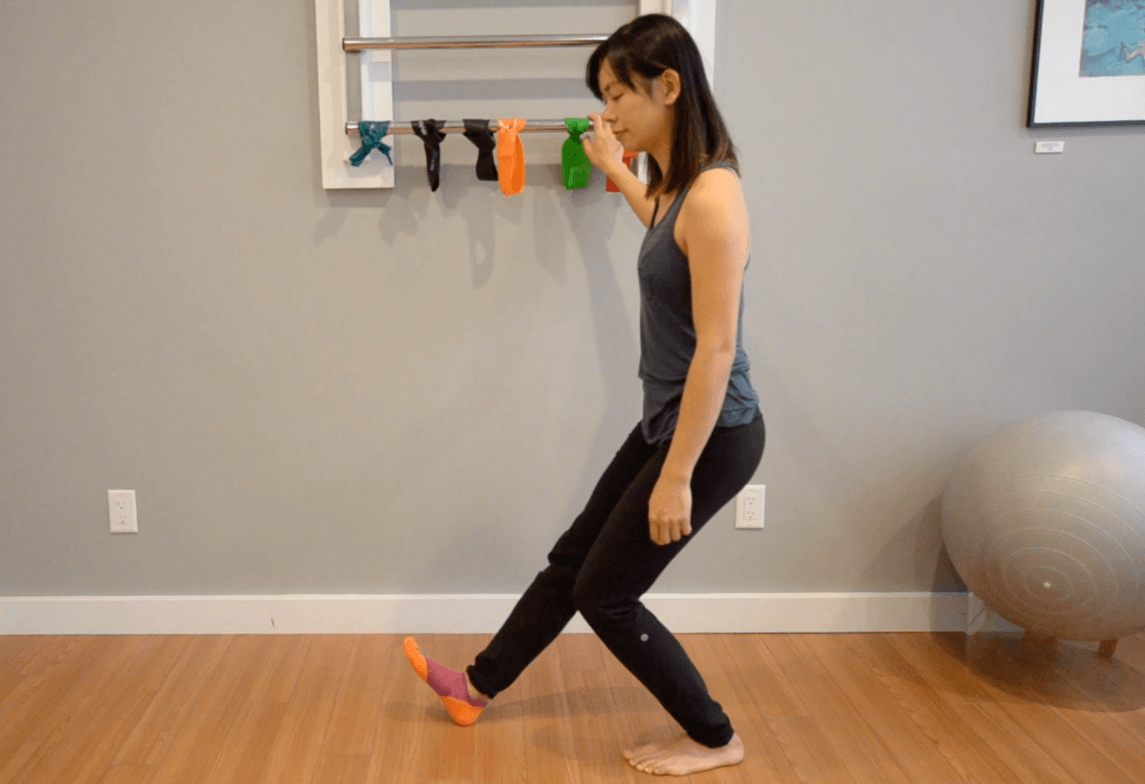 Use a slider or wear a sock so your right heel will slide more easily for this exercise.

Begin by making sure that you’re supported, so you can hold onto the wall or a railing to ensure that you maintain your balance initially.

With your weight on both legs bend both knees into the squat position. As you get close to a 45 degree bend keep the left foot planted on the ground while you push through with force into the right heel to straighten out the right knee, while you move towards a 90 degree bend with the left knee.

Return back up to the start and repeat this for 15 repetitions for 3 sets on each side.

This is a closed chain eccentric strengthening exercise for the right hamstring muscle. It’s important to also do the other side to keep it balanced.​ 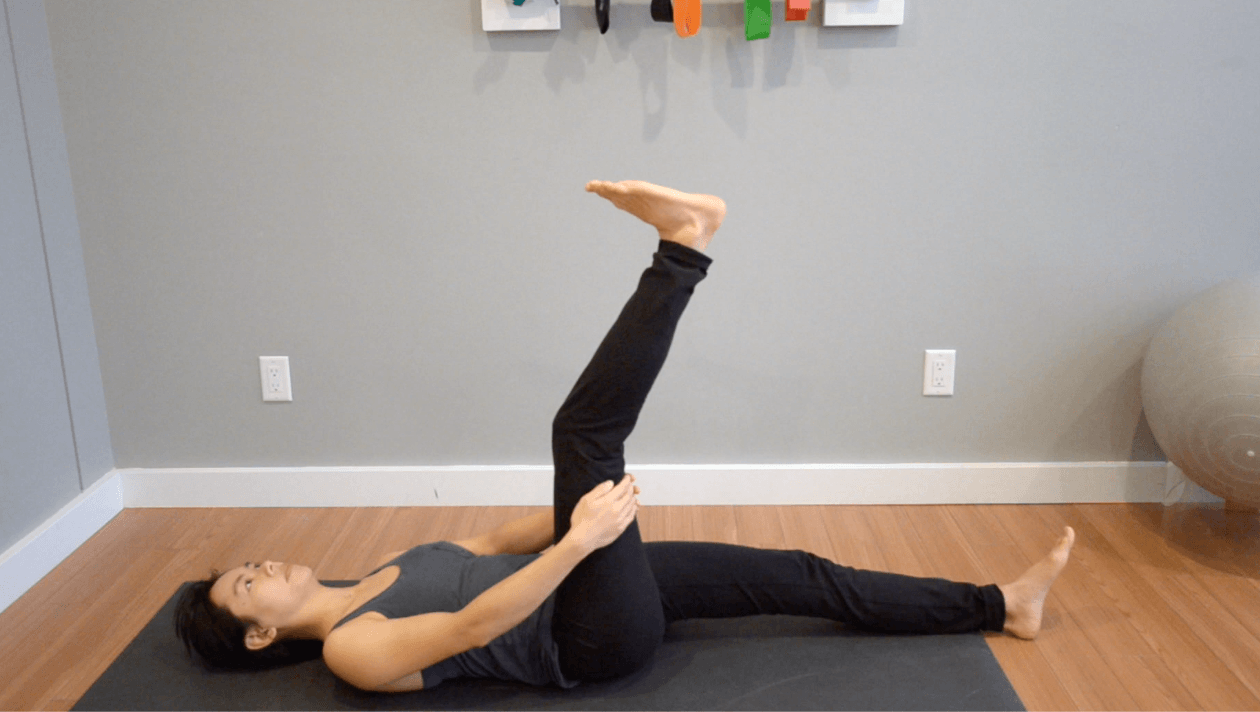 This is a good exercise for the initial stages of rehab for your strained or torn hamstring muscle.

Start by lying down on your back on the ground with the knees bent. To keep the spine in neutral, pull the inner core muscles below your belly button in towards your spine and straighten the left knee out on the ground.

Bring the right knee (with the affected hamstring) towards your chest and hold it securely with both hands behind the thigh. Slowly extend the knee to the end of range comfortably and return it back to the bent position. Do this for 15 repetitions 3 sets 2 to 3 times per day.

If you’re unsure about the exercise or have uncertainty about where you are at with your injury book an appointment and have one of our Physiotherapists at either our North Burnaby or Vancouver locations to check things out. 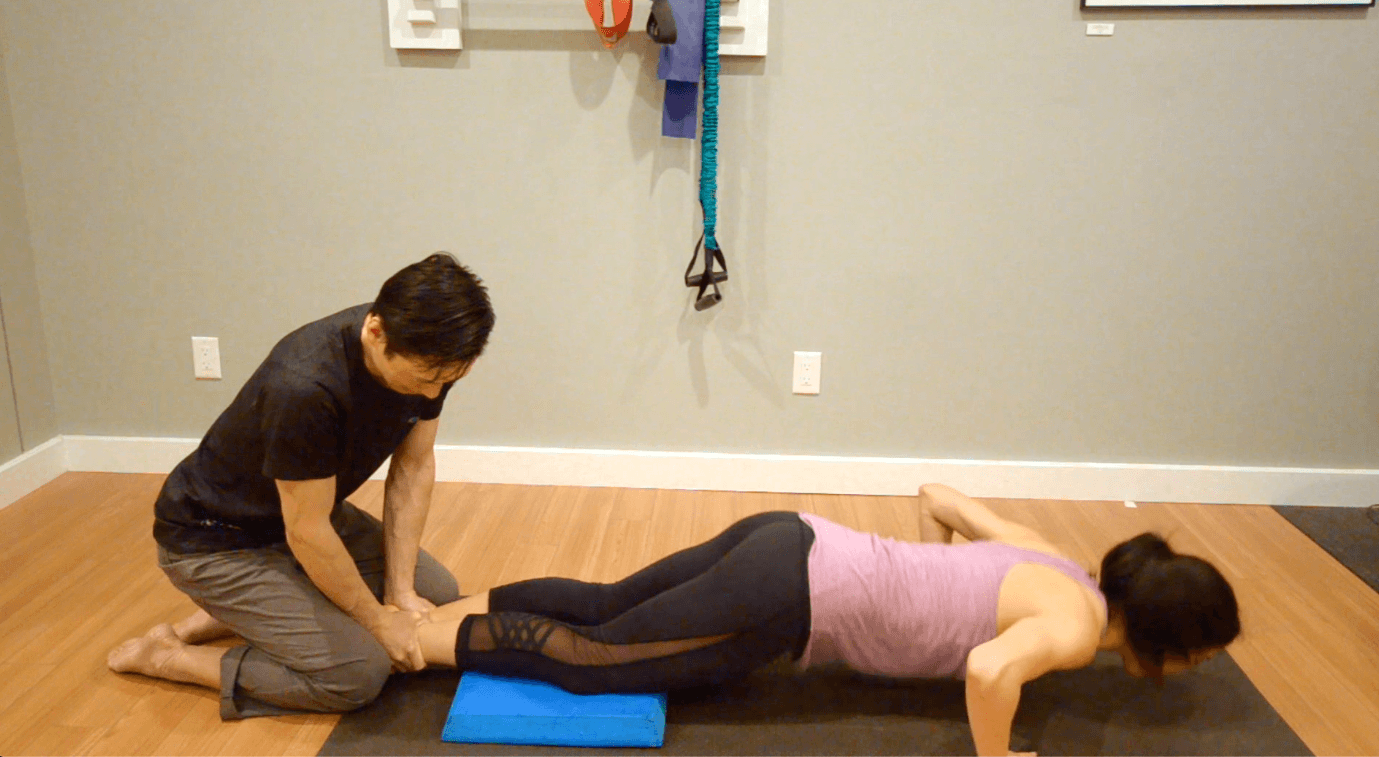 You can perform this exercise with your ankles secured under a bar, on a squat rack or wall bar or have a partner hold your feet and ankles down. Use a yoga mat to make it more comfortable for your knees.

Start by pulling in your inner core and keep it engaged the entire time. With your hands out in front of you, then slowly lower yourself down to the ground in a controlled manner into a push up position. Once you make contact with the ground, then push yourself back up.

Repeat this for 10 repetitions, doing 3 sets daily. This is an advanced level strengthening exercise for your hamstrings in conjunction with your core stability muscles.

If you have any pain or dysfunction while doing this exercises come into one of our clinics at either the Vancouver or North Burnaby locations to have one of our Physiotherapists check you out. 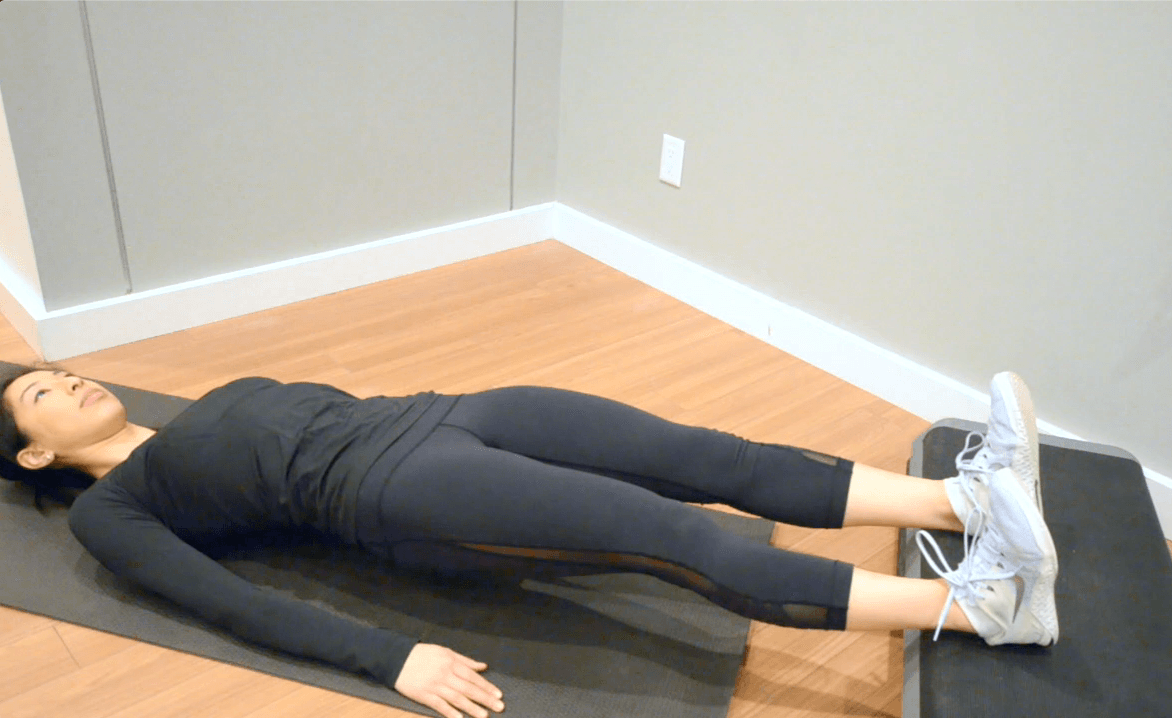 As you move past the initial stages of an acute hamstring muscle strain or acute flare up of your tendinopathy you want to start progressively loading it to rehab it properly.

Start by lying down on the ground with your heels placed on a raised step about half a foot high or so to start. With your core muscles engaged and both knees straight, press your heels onto the step lifting your buttocks off the floor.

Avoid bringing your butt too high up so you can isolate primarily into the hamstrings while also activating your core and gluteus muscles at the same time. Hold this isometric contraction for 45 seconds and repeat 5 reps for one to two times per day.

If you experience any pain or have any problems doing this exercise then consult your local Physiotherapist before continuing. 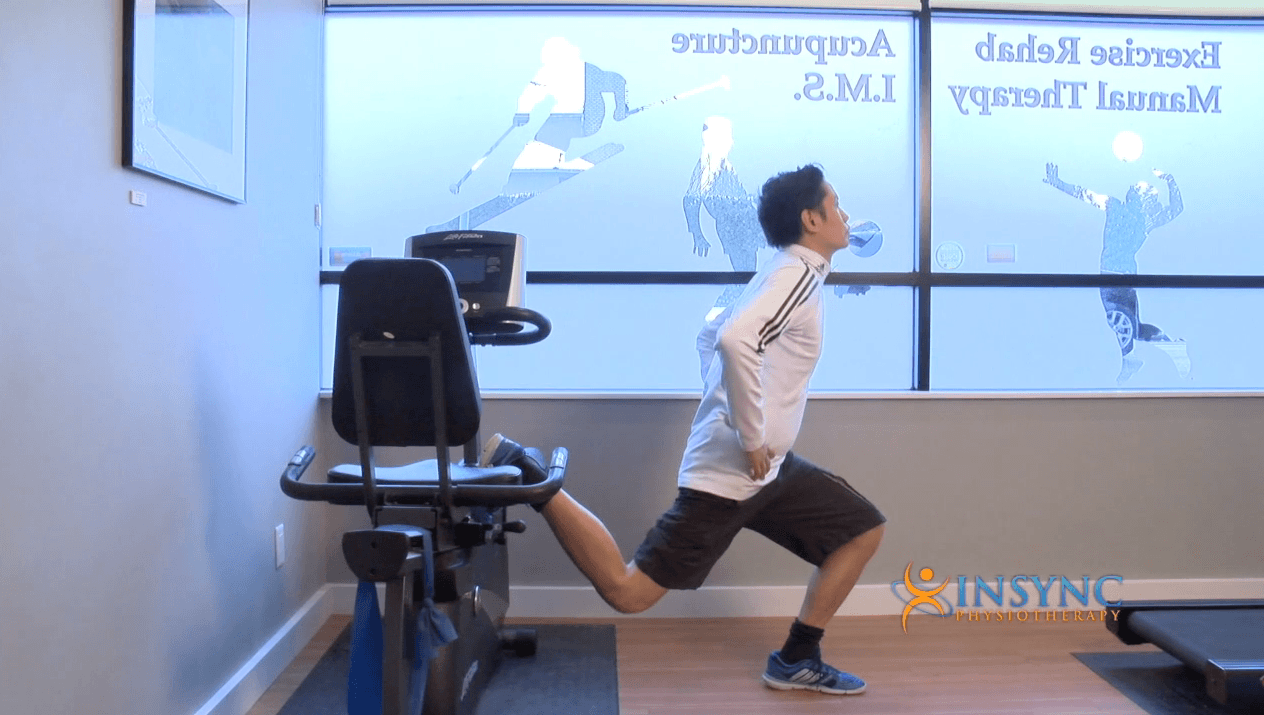 This exercise is great for the more advanced stages in the rehabilitation of your injured hamstring muscles.

Place the ball of your foot on a chair or bench that is knee height and maintain this pressure throughout. Engage and pull your inner core muscles in below your belly button while you squat straight down keeping your body vertical. Do not extend beyond a ninety degree bend in your knee while your knee stays in line with your hip and second toe and above your foot. Perform 3 sets of 10 for each side.

The Squat Lunge Hops is a variation or progression of this exercise to something more challenging. When you come back up from the squat, push up as high as you can comfortably aiming for a soft & controlled landing. Do not extend beyond a ninety degree bend in your knee while your knee stays in line with your hip and second toe and above your foot. Perform 3 sets of 10 for each side.

If you have any pain during the exercise or are unsure about what you are doing, consult your local Physiotherapist before continuing. 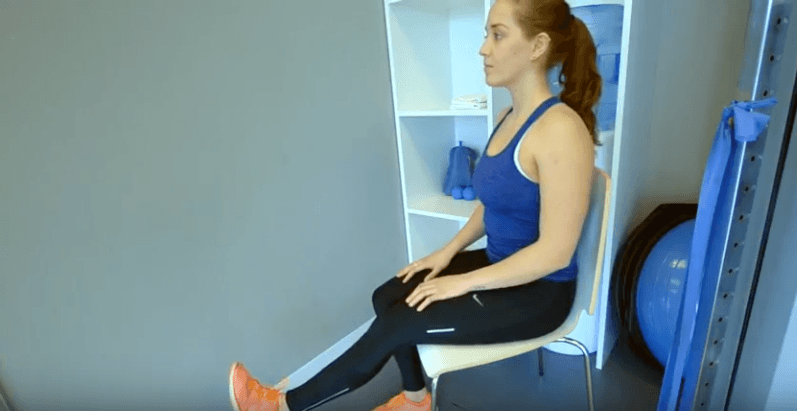 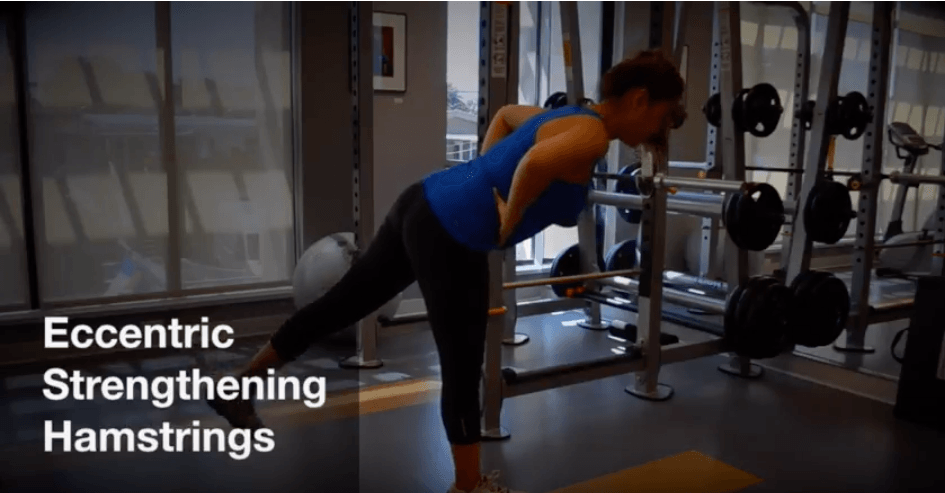 This exercise is targeted for eccentric strengthening of the hamstring muscles and tendons. Start with your hands on each side of your hips. Engage your inner core by making yourself skinnier below the belly button and pulling in your waistline. Standing on one leg, bend your body forward by pivoting at the hips and allowing the non weighted leg to pendulum upwards with the movement. Return back to the start and repeat 3 sets of 15 repetitions. This exercise is excellent for increasing the functional strength of your hamstring muscles in conjunction with your core stability. It is particularly useful after recovering from hamstring muscle and tendon strains and overuse tendinopathies.