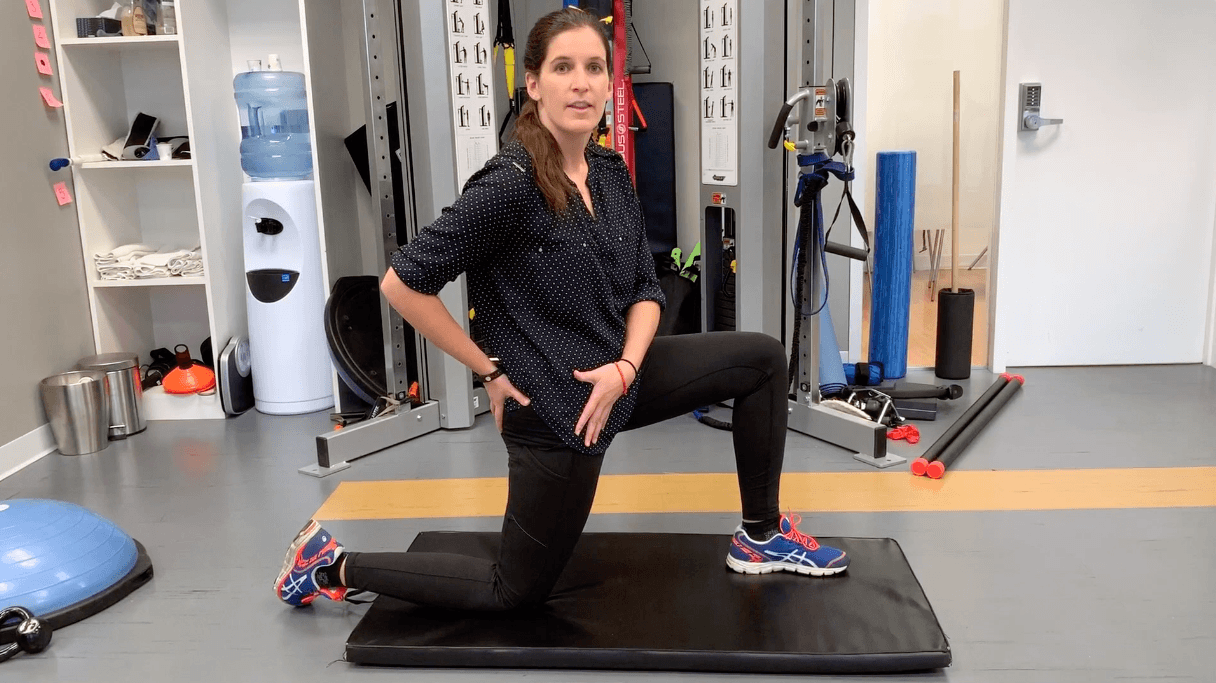 I’ve recently gotten really into mountain biking, both downhill and trail riding. A great place to learn how to do either is at Burnaby Mountain. They have awesome trails for beginners.

After mountain biking, or riding in general, a great thing to work on is your hip flexors. So stretching out your hip flexors because they’ve been in this bent position for the whole ride.

Another thing I like to work on is back extensions because you’re in this forward position all day it’s good to do things like cobra, you could do back extensions over a foam roller to try to extend your back because you’ve been forward the whole time. If you have any real injuries after biking it’s a good idea to get a physiotherapist to check them out.

So come on by to INSYNC in Burnaby Heights!

One of my favourite stretches for hip flexors is the runner’s lunge stretch. So one of the biggest mistakes I see with this stretch is that people just lunge forward, have their knee over the front foot and they’re really just arching through their back.

So one of the most important things to do when you start this is actually tip your pelvis back a little bit. You can see that opens up the front of my hip. And then you don’t actually have to lean over too far forward to get that stretching sensation. Have your foot far enough forward and when you do press that hip forward , your knee doesn’t go over your toe. But the important thing is just opening up the front of that hip. And, so you just want to just hold that for 30 seconds and you want to repeat it 3 to 4 times.

One of my favourite exercises for getting your upper back open is back extensions over a foam roller or reverse crunches over the foam roller. So you want to lie on the foam roller around where your bra strap or a heart rate monitor would hit. Knees bent. You want to keep your chin tucked a little bit. You can support your head lightly. You don’t want to crammed forward or extended back.

So, just a slight chin tuck and you’re just going to extend your upper back over the foam roller and come back up. You want it to just be an upper back extension, so stop when it feels like the low back is extending or your hips are coming off the ground. So a couple of things to think about are having your hips solid on the ground, not letting your ribs pop up, because when your ribs pop up it’s usually your low back extending. And so just going as far back as your upper back will take you and coming back up. I like to do around 3 sets of this 10 repetitions. So 10 times, take a little break and repeat that 2 more times. 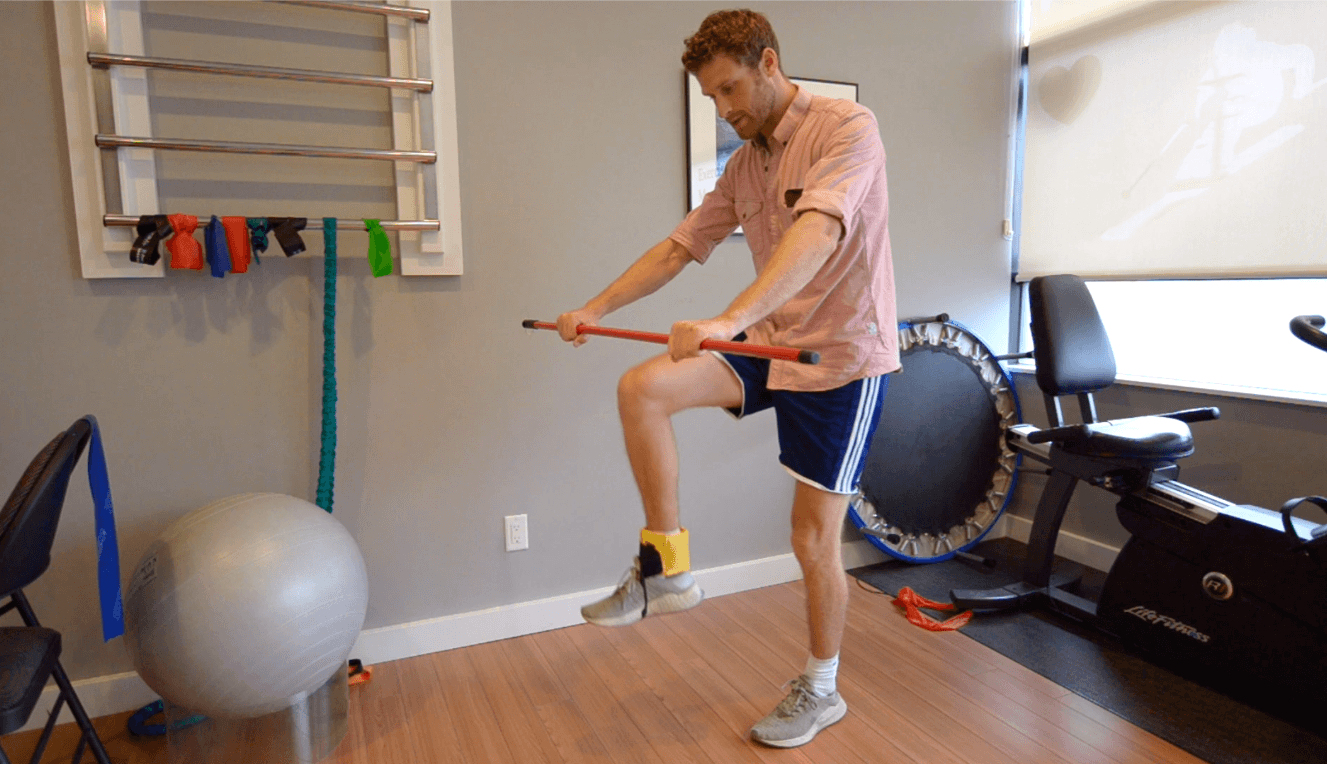 Hi this Simon Kelly here at the Insync Cambie Village clinic just showing you a slight progression from the last exercise I showed.

What you need to get is like a sweeping brush, this is the end of a sweeping brush obviously holding it out in front of you like that. A good idea again to keep the elbows slightly bent. 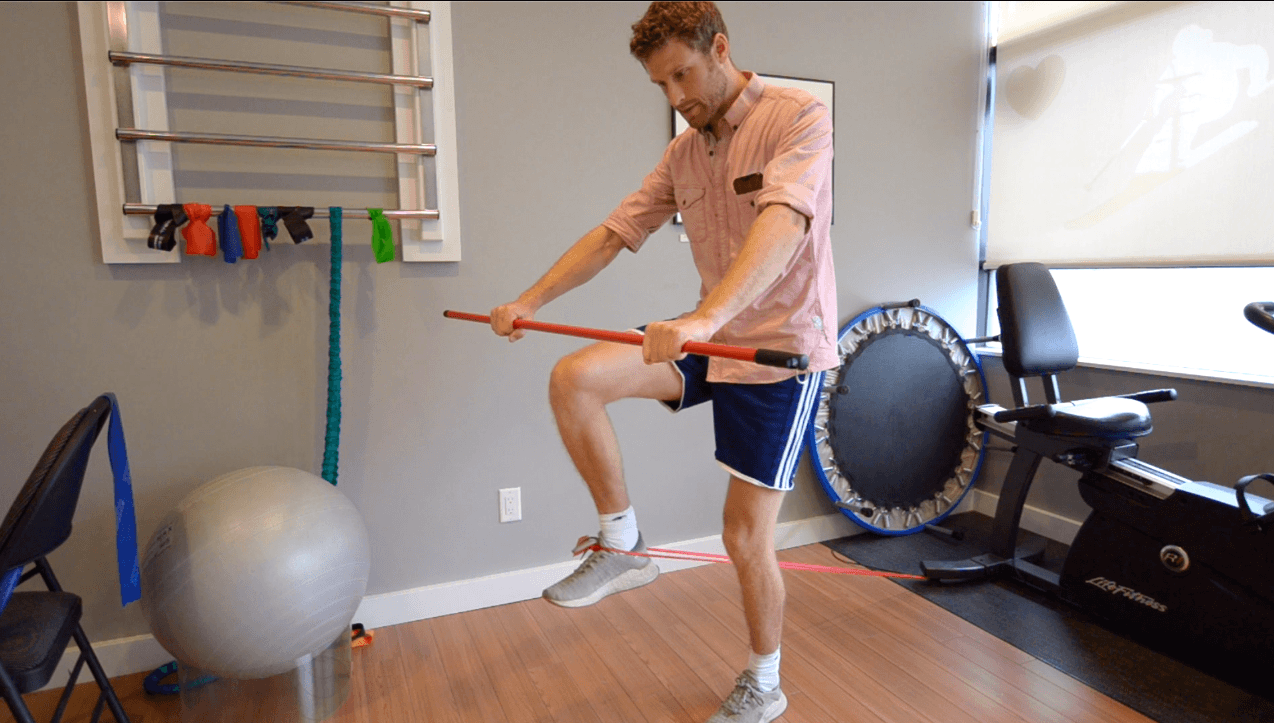 Hi, this is Simon Kelly, physiotherapist in the Cambie Village clinic here, Insync. And today I’m just going to show you a simple exercise to really focus on your hip flexors while you're biking.

So I am just going to bring my right leg forward, nice straight back if you can. It’s good to keep your elbows a little bit bent as well when you're biking as well. So obviously the bumps in the road aren't going through straight arm, so I usually keep my arms a little bit bent in this as well just to get kind of re-enact exactly what you're doing on a bike.

So I usually do this maybe 12 sets and that's a nice burn on the right iliospasoas, your hip flexors here. Try to be as steady as possible, bringing the knee up, good! A little bend in the elbows and you would be doing that as I said 12 times, three times a day. Cheers! 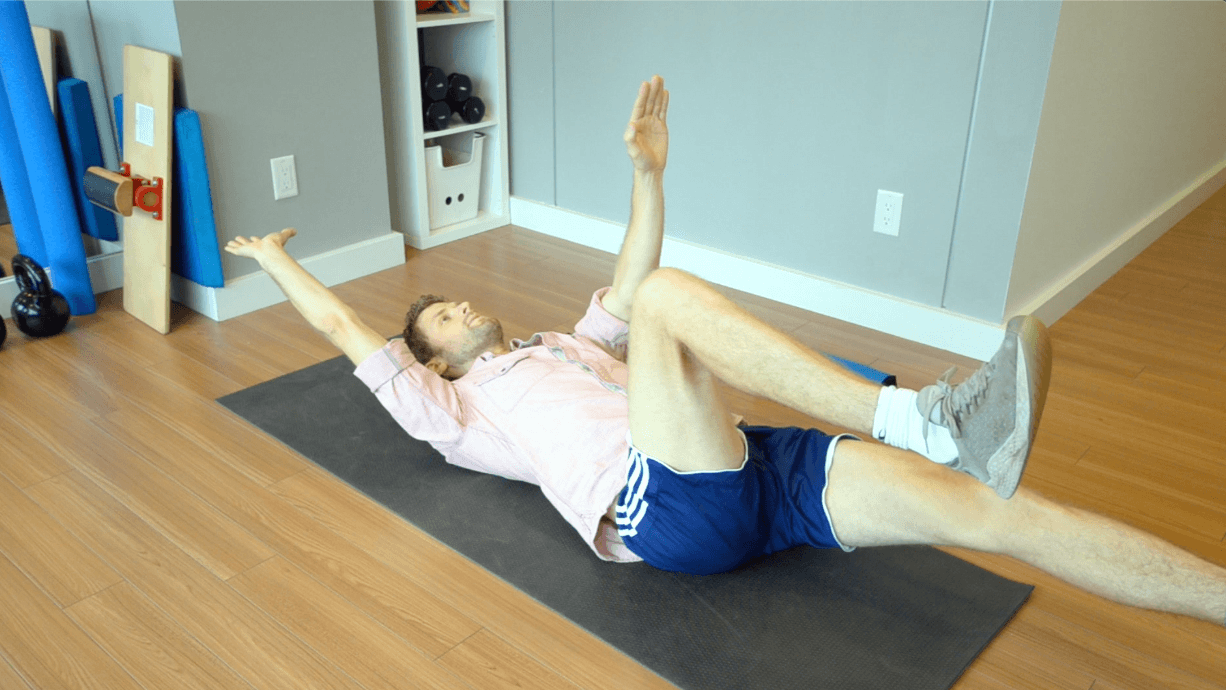 Hi everybody, just Simon here again. Just going to give you a simple core exercise to do just to strengthen the core. Core is very important like I said before because it creates a stable base just to power into the lower limbs.

Then you’re going to do 10 reps of each for three sets if you can. 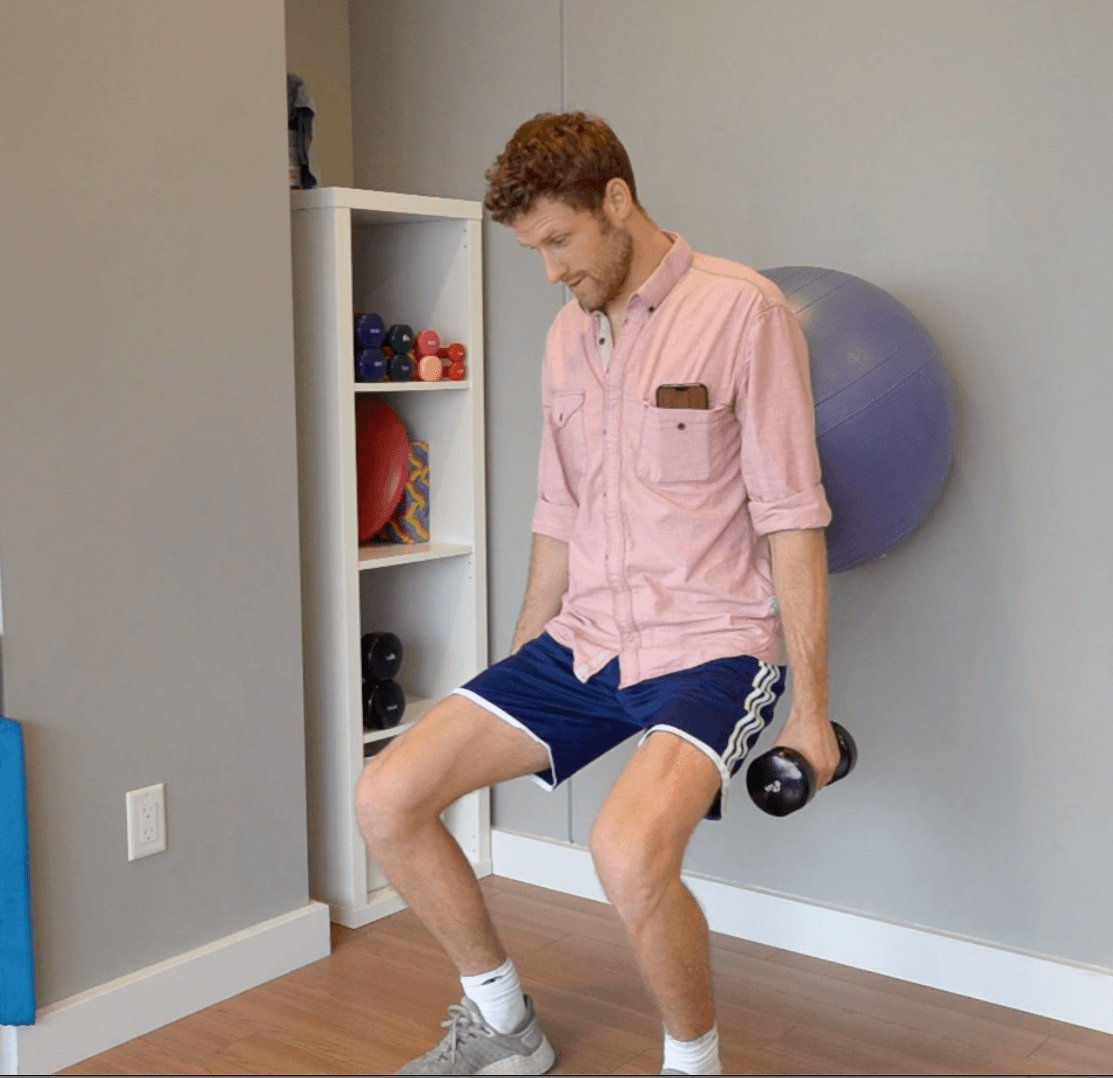 Hi everyone just another exercise to help with cyclists here. A pretty common one actually. I’m just squatting, here I have 10 lbs in each hand. So I'm going to go slowly down. I use a ball at the back actually for proprioception, I like feedback.

Knees are shoulder width apart, you're just slowly lower down. This is quite good for the quads here at the front. It lengthens under tension, which means its an eccentric contraction and then we are slowly going to come up.

We are going to do the same again. The main things that are going on here is really working the quads slowly on the way down even hold is for two or three seconds at the end then pump it up as well. Really really good for the gluts as well, all powerful muscles when you're trying to drive the bike forward. I would usually do this maybe 12 times, 3 times a day if I could.

It's also what we called a closed kinetic chain exercise so our feet are fixed to the ground just like you're doing in cycling. So that’s another good one just to add to the core exercises. Cheers everybody! 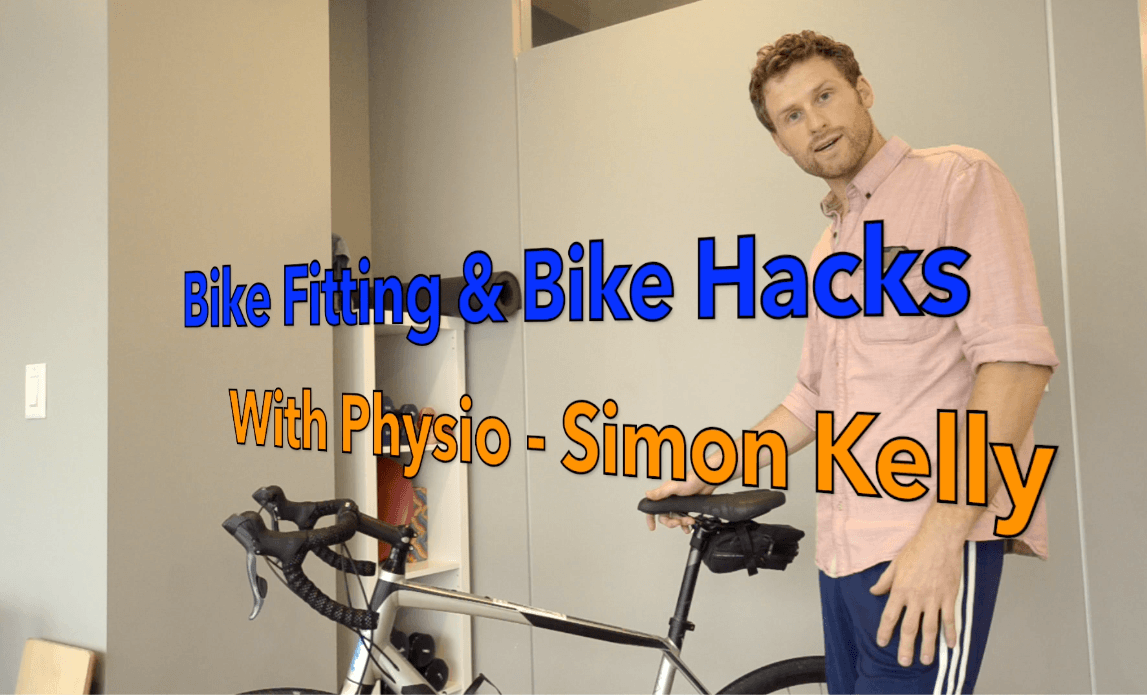 Hi everybody, my name is Simon Kelly, physiotherapist here at Insync Physio and at Cambie Village here. Today is just a session on sort of bike hacks and bike fit. I personally rode the Gran Fondo from Whistler to Vancouver. It was 122 km. So I obviously trained locally. Did the local mountains, you know the Grouse Grind it's called obviously for that, Seymour Mountain and Cypress, that was really good training I felt. Up a hard mountain, 1km up is pretty tough going but that kind of prepared me well for the 122km.

Anywho, I'll discuss what happened on that in a moment.

First of all I just want to say how important the bike fit is. If the handle bar is down too low, you know a cyclist holds like this, especially in a downward position, there is a little nerve that runs through our hand here on the inside. It's called cyclist palsy. But the nerve is called ulnar. So it's very important to change your grip more so to the thumb side of the hand, or else wear a pair of gloves and make it wider so you're not compressing that nerve.

The other nerve that passes through the wrist, far more common people know a lot more of it, is the median nerve or carpel tunnel syndrome. You might of heard it before. That's from keeping your hands in this position. Now this would usually happen with riders that are riding for hours on end. Didn't happen me thank god on the Fondo.

When the bar is too low, as well it can also create pain in the back of your neck. I'll kind of show you here briefly if I can, sort of. So it it's too low, you're leaning down and your head is craning up, so a lot of cyclists looking up like this get a lot of pain in the back of the neck. So you want to make sure this is the proper height.

Same on the saddle. Saddle height it very very important. If it's too high, you're going to get pain in the back of your knee. If it's too low, a lot of cyclists can have pain in the front of the knee, anterior knee pain or patellar femoral knee pain is what we call it. Lots of different fancy names for that but we talk about that again.

The other thing I wanted to talk about is cleat position as well, also affects pain in the knees. Some cleat position--obviously cleats are what you have under your shoe that clip in here. I don't have them on right now, so I might have to show you in another video. But that can sort of have pain in the outside of the knee that's known as ITB band syndrome where you get a lot of friction from constant bending of the knee here on the outside. Where the ITB band comes down, you can kind of see my ITB joining onto the outside here. So cleat position can be very important for that. They are just a couple of hacks I just wanted to discuss here today.

Tune in sorry - Just before I go when I was personally doing the Gran Fondo, I had a bit of numbness in my left foot actually at about maybe 90km, wasn't too sure why. I had to research it afterwards actually. Sometimes it's due to very tight footwear which I kind of like things very very tight, because I don't want anything falling or moving when I'm cycling that kind of distance. So that's one little fix if you're getting numbness into the left foot. If it's numbness though and it's kind of continuing too long, it could be something more serious. You might have to go to your doctor. It's something called compartment syndrome but that's something else.

Final thing I wanted to talk about was numbness and I was getting a lot of pain sort of in my lower abs. So I believe my core was actually quiet weak. So it think it's very very important to have a strong core, strong stability that drives into your lower legs and that will get you up doing long races like that as well.