4 Tips on How to Improve Your Rock Climbing Ability 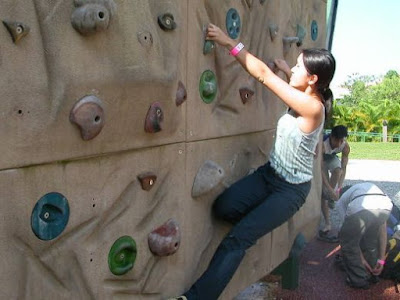 Pumping iron might be useful at a later stage but it won’t do you much good at the start. Plenty of buff guys coming into the rock climbing gym can’t climb to save their lives.
If you wanted to get stronger, you should do it by climbing more, not swapping out your climbing sessions with regular weight training sessions. Why? Because weight training is symmetrical. When you do a lat pull down, you pull equally with both arms. You don’t use your legs to help you and you certainly don’t have to balance on tiny footholds while you’re at it. Additionally, time spent at the regular gym is time you aren’t spending climbing. Since you can only do so much weight training (your rock climbing sessions included) a week before you start to overstrain your muscles, you lose out on the opportunity to hone your other climbing skills – such as balance, finger strength, footwork, etc.

If you want to get better at climbing, then you have to practice down climbing. Why? Down climbing helps you focus on the one thing most climbers, especially newbie climbers, often forget – your feet. When you down climb, the first thing you think about is: “Where am I going to put my foot?”
Many new climbers often underestimate just how much their legs can do for them when they climb. It has been said that you can tell the difference between a beginner skier and an experienced skier by listening to them complain about the parts of their bodies that ache after a day’s worth of skiing. A beginner skier will complain that their arms ache the most, while an experienced skier will complain that their legs ache the most. Similarly, the first part of a newbie climber’s body to give way in climbing is the arms and that is because they often forget about their legs. To reiterate the fact that many newbie climbers give little value to the power of their legs, you’ll hear many of them offer this statement when citing how they plan to get better at climbing: “Let me build more strength in my arms first.”
Why are your legs so important in climbing?
The more weight you transfer to your feet, the less mass you have to haul up with your arms – this is great especially if your upper body strength is poor.
The most common reason why a newbie fails to make it to the next hold is because they can’t reach it or they are unable to get a good purchase on the hold because they are too low. Just moving your feet up a few centimeters can be the difference between making it to the next hold and falling off. The most common mistake a newbie makes is that they forget to move their feet up.
The greatest virtue of down climbing lies in the fact that it makes you think about your feet and it teaches you to focus on your footwork. So the next time you’re climbing at the gym, try down-climbing a couple of routes. You should start with the routes that you normally “warm-up” on, that is, nothing too difficult.

If you’re new to climbing, you’re probably wondering what the heck is traversing? It is basically a horizontal movement across the wall as opposed to a vertical climb up the wall. It is normally done as a climbing warm up before you start climbing in earnest at the gym. Just start at one corner of the gym and keep traversing horizontally until you drop off.
When you first begin traversing, you may find yourself unable to stay on the wall for very long. Keep practicing until you can make your way around the gym easily or do laps across a short section. Try traversing with different holds and finding different rest positions instead of coming down when you need to take a break.
If you are traversing as a “warm up”, then do so only until you feel your muscles warming up and stop well before the lactic acid builds up in your forearms (often called a “pump”). If you traverse until your arms are pumped, you won’t be able to do much climbing, especially if you’re new to the climbing scene.
What does traversing do for you?
It teaches you to use your feet and it helps you think of different ways to move on the wall. You can learn which moves are easier for you and you can work through a problem close to the ground which allows you to tackle the problem without wasting energy on the parts you can do easily. If you find it too easy and you want something harder, try skipping holds or use fingertips only – vary the exercise. As you get better at traversing, you can graduate to “bouldering” which I will talk more about below.

Variety is the spice of life. It is also the key to getting better at whatever you do. Always try to climb something new and different – work on different routes, climb at different crags, go to different gyms. This helps you to improve a couple of things:
Add variety to your training sessions. Try different styles of climbing. You can work any of the following suggestions into your training program: